Crimean customs: from the beginning of year for infringement of term of temporary import of vehicles filed 70 cases of AP

Crimean customs: from the beginning of year for infringement of term of temporary import of vehicles filed 70 cases of AP

From the beginning of the Crimean customs for violation of the temporary importation period, and conducting illegal operations with temporarily imported vehicles brought 96 cases of administrative offenses, of which 70 cases under part 1 of article 16.18 of the administrative code of the Russian Federation and 26 cases under part 2 of article 16.24 of the administrative code. According to the results of consideration of cases sentenced to an administrative fine for a total amount of 58,5 thousand RUB Judiciary decided on the confiscation of 13 vehicles. Since the beginning of the year seized 5 vehicles: 4 vehicles in connection with the failure of their export from the territory of the Eurasian economic Union later than 6 months from the date of expiry of the time limit and 1 vehicle in connection with the transfer of the right of use of the vehicle in violation of restrictions. 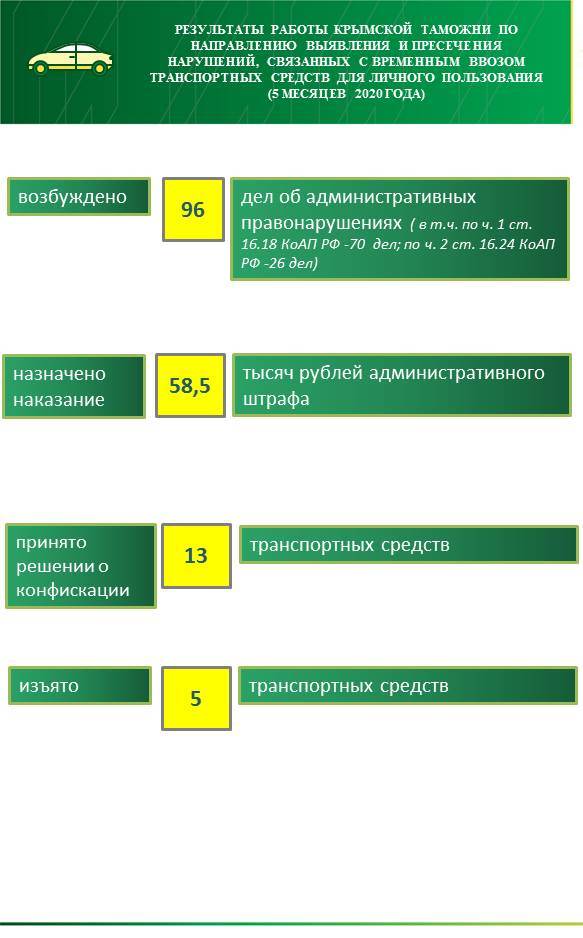 Crimean customs drew attention to the fact that in a pandemic COVID-19 the period of temporary importation of vehicles for personal use that will expire in the period from 1 March to 30 September 2020, was extended until 30 September 2020. The decision of the EEC Council No. 47, dated April 29, 2020, entered into force may 28, 2020, and applies to legal relations arising from 1 March 2020.

Owners of such cars do not need to address in customs body for filling of the passenger customs Declaration or declarations: the deadline will be extended to the previously filed documents. However, this does not exempt individuals from having to comply with the requirements and limitations of use of temporarily imported vehicles, as well as from the obligation on their reverse export.

Thus, owners of vehicles which was impossible to complete the temporary admission procedure, in connection with the pandemic COVID-19, until 30 September 2020 to fulfill the commitments for the import of such vehicles into the territory of the EEU.

Undeclared goods identified Rostov customs officers on Board from Romania