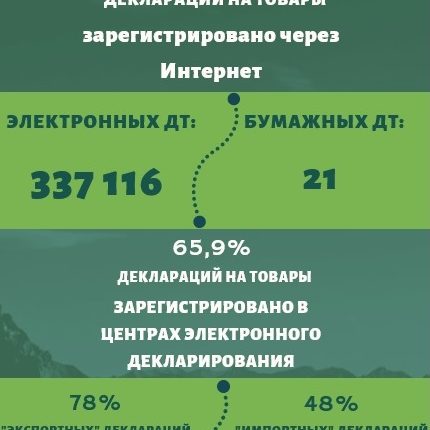 In accordance with the technology of remote release, the application of which separated the functions of documentary and actual control, the customs authorities of UTAH (as internal and external customs authority) committed customs operations in respect of 240 687 DT, which is 1.5 times more than in 2018 (159 416 DT). Of particular importance in the development of this direction have centers of electronic Declaration (CED) that implement their activity only in the technology of remote release as the internal customs authority. The complex program of development of the FCS of Russia for the period up to 2020, the concentrations of the customs Declaration in CED identified as one of the priority directions of improving customs administration. In order to implement this direction FCS of Russia conducted an experiment on the concentration of the customs Declaration in CED.

Currently, USP operates 3 CED: in the regions of Astrakhan, Rostov and Novorossiysk customs. All customs posts (CED) UTAH included in the list of customs authorities, involved in the experiment the concentrations of the customs Declaration in CED.

By the end of 2019 CED UTAH decorated 223 656 DT that amounted to 65.9% of the entire declarative region of the array: in the Astrakhan customs of 96.8%, in Novorossiysk – 99,3%, in Rostov – 82,8% (in 2018 136 531 DT, which accounted for 42.8% of the total number of registered diesel fuel in the region). In the framework of application of technology of remote release interaction CED UTAH in 2019 occurred with the customs posts UTAH (98%), as well as customs posts, located in the region of activity of other customs administrations and customs offices directly under (2%).

Among the promising customs technologies, which are implemented in the region of UTAH, are the technology of automatic registration of DT and release of goods in accordance with customs procedures for exports and production for domestic consumption.

Indicator implementation of the technology of auto-enrollment in the region the activities of the office increased from 64% in 2018 to 78% in 2019 for the “export” DT, and from 24% to 48% as “imported” DT. In absolute values for 2019, the customs authorities of the region automatically registered 123 488 “export” DT and 78 515 “imported” DT (in 2018 was in automatic mode 89 136 DT DT 505 38 and placed under the customs procedure of export and production for domestic consumption, respectively).

Leaders in auto-enrollment began Krasnodar customs for export, Novorossiysk – on the import, autobypass – Astrakhan – in both directions.

Special attention of the Southern customs control is given to the development of the information customs technologies in the application of the transit procedure. In 2019, the customs authorities of UTAH issued nearly 85 thousand electronic transit declarations. The share of goods produced in electronic form, more than 96% of the total volume, placed under the customs procedure of transit. More than two-fold increase in the number of consignments that were released with the use of technology preliminary Declaration (in 2018 2 transit 190 preliminary declarations in 2019 – 4 863).

From may 2019, the customs authorities of UTAH introduced auto-registration of transit declarations. By the end of 2019 in the region of UTAH automatically registered more than 4 thousand ETD. Improving the quality of filling in the boxes of electronic transit declarations by traders will increase the share of automated check-in.

From November 2019 technology of automated production of electronic transit declarations. The number of transit declarations issued its application by customs authorities of Novorossiysk, Rostov and Taganrog customs offices for two months, reached 696.

In 2019, the work continued on the implementation of the KPS “Portal port”, the use of which was 37 932 the case of the ship at arrival/departure of ships, that in 2 times exceeds indicators of the use of this software in 2018 (18 743 marine Affairs).

The illegal transfer to China of more than 1.2 million dollars has revealed the Chita customs

The Tver customs in the work will help students

More than 1,000 pieces of clothing for themselves to carry without customs…

Officials of the Sevastopol customs found and seized the smuggled Apple products,…